Dr. Dhanasekar graduated fom Madras Medical College in 2002. He completed his MS (General) from the same institution in 2006, his DNB (General Surgery) in 2008 and M.Ch (Surgical Oncology) from Tata Memorial Hospital, Mumbai, in 2013.

As a Junior Surgeon he worked with the Renal Transplant team in Aswene Soundara Hospital and Research Centre, Chennai for 40 transplants. As Junior Surgeon in Cardio-Thoracic team in Moulana Hospitals, Kerala he assisted in 50 open-heart surgeries. He has served as a Senior Resident in the department of surgical oncology, JIPMER, Puduchery from 2009 to 2010 as Consultant Surgical Oncologist, Chettinad Hospital & Research Institute, Chennai from 2013 to 2014, and is working as Consultant Surgical Oncologist in Apollo Speciality Hospitals, Chennai from 2014.

He has also served as Assistant Professor in the department of General Surgery at Chettinad Hospital & Research Institute from 2007 to 2009. He has made several presentations at various conferences and has publications to his credit. 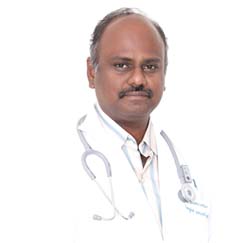